The speculation that the Philadelphia Eagles would be dealing quarterback Carson Wentz to the Indianapolis Colts became a reality on Feb. 18. The Colts sent a 2021 third-round NFL Draft pick, as well as a …

The speculation that the Philadelphia Eagles would be dealing quarterback Carson Wentz to the Indianapolis Colts became a reality on Feb. 18. The Colts sent a 2021 third-round NFL Draft pick, as well as a conditional 2022 second-round pick to the Eagles to acquire Wentz. 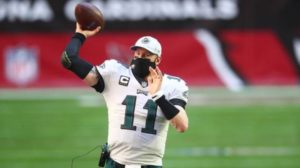 “Carson Wentz” by Getty is licensed under CC BY 3.0

Immediately, there was action at the best online sport betting sites on the odds of the Colts chances of winning Super Bowl 56. On average, Indy’s betting line shortened to +2000 from a previous mark of +2500.

Among AFC teams, the defending conference champion Kansas City Chiefs (+500) and the Bills (+1400) are still given better odds of winning the Super Bowl than the Colts. The Baltimore Ravens and Cleveland Browns are offered at the same +2000 betting line as the Colts.

Which Carson Show Will Be Playing In Indy?

Which version of Wentz will the Colts be accessing when he arrives in Indianapolis? That’s a key factor in this deal.

In 2017, Wentz looked to be heading toward an MVP season as he led the Eagles to an 11-2 mark when injury ended his season. With backup Nick Foles under center, Philadelphia went all the way to win the Super Bowl.

However, during 2020 he was arguably the worst QB in the entire NFL. Wentz threw for just 16 TDs. He was picked off an NFL-worst 15 times, and suffered more sacks (50) than any QB. The Eagles were 3-8-1 in games started by Wentz. Eventually, he was benched in favor of 2020 second-round draft pick Jalen Hurts. 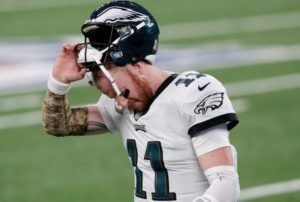 Another factor that made Indy the ideal landing spot for Wentz was the presence of Colts head coach Frank Reich. He was Philly’s offensive coordinator in 2017, which coincidentally was also Wentz’s best NFL season.

In 2017, Wentz threw for 33 touchdowns and was picked off only seven times. He averaged 7.5 yards per attempt. Since 2018, when Reich left to take over in Indianapolis, Wentz has thrown 64 touchdown passes against 29 interceptions. His yards-per-attempt average dipped to 6.7.

If being reunited with Reich can also hook up Wentz once more with his lost confidence, both he and the Colts could be in for monster years in 2021.

Colts Are Poised For Big Things

Indianapolis has a top-10 defense and an offense that was just a notch-below top 10 a year ago. Working behind perhaps the NFL’s best offensive line, Wentz won’t be running for his life like he was last season while setting up behind the turnstiles in Philly that offered him little protection. The Colts will need to find a left tackle to replace the retired Anthony Castonzo, but that could be done with their first-round pick.

Indy goes three deep in quality running backs with Jonathan Taylor, Nyheim Hines and Marlon Mack. The Colts are also wealthy in talent at receiver. NFL.com rated the Colts’ 2020 draft class as the NFL’s best. The Colts felt they were a QB away from being a legitimate Super Bowl contender and with Rivers at the helm, very nearly knocked off the Bills in the postseason.

The best part about this whole package from Indy’s point of view is that it really is a no-risk proposition. That conditional 2022 second-round pick only becomes a first-round choice if Wentz takes 75 percent of all snaps next season and Indy misses the playoffs, or at least 70 percent of the snaps next season and the Colts qualify for the playoffs. If the latter is the case, it’s a win-win. Philly gets a first-round pick. Indy gets to the postseason with a 28-year-old QB of the future.

If Reich can right Wentz, Indy is going to be the best team in the AFC South, and a handful for any NFL team to deal with on any given Sunday.

8 Things To Consider Before Taking Supplements